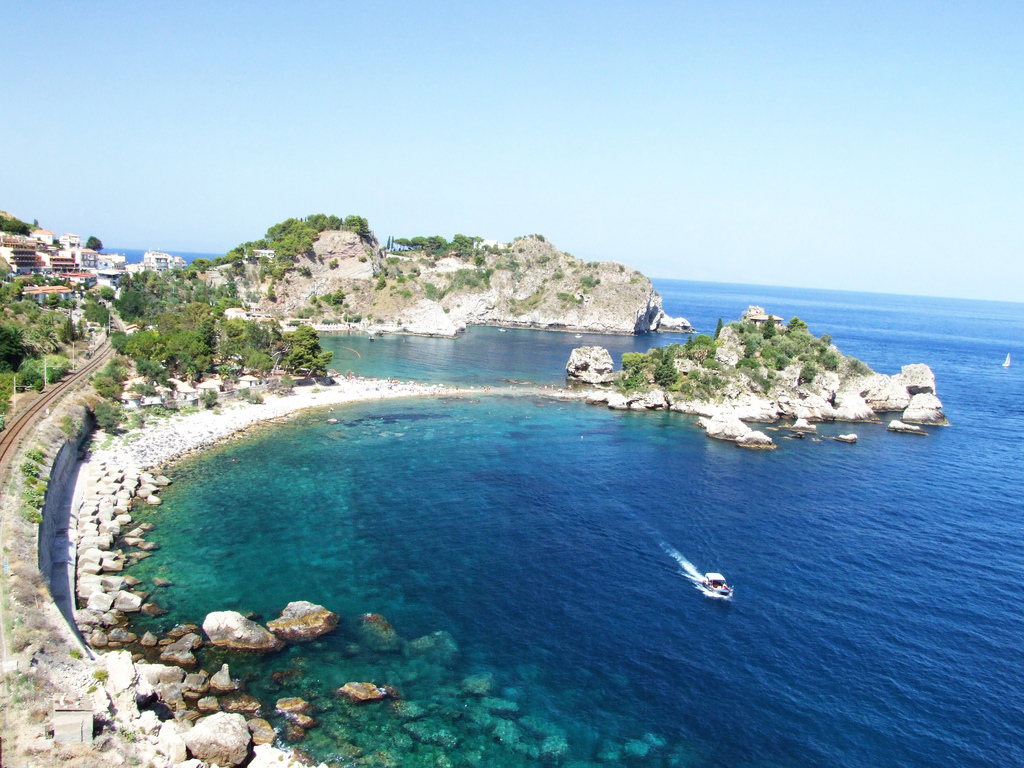 The city’s origins can be traced back to prehistoric times. Late during the Bronze Age, a group of Sicilians settled on top of a hill facing the sea on the Ionian coast of Sicily. In the small village of Tauromenion, the inhabitants of Naxos found refuge in the fifth century BC after being destroyed by Dionysius I of Syracuse. In the thirteenth century, following the founding of several monasteries, Taormina was brought back to life, but always remained a little more than a village.

It’s fortune began in the nineteenth century when, after the visit of Goethe, who spoke of its beauty throughout Europe, became almost a must between the stages of the the ‘Grand Tour’. The travelers of the last century were the forerunners of the many tourists that every year visit Taormina, the capital of tourism in Sicily.

The Ancient Theatre is the central monument of the city, not only for its intrinsic artistic value, but also for the scenic location in which it is located. The view can be enjoyed from above (including Etna) and is even called the ‘panorama par excellence’, and not to be missed. It is the second oldest theater on the island (109 m diameter) after that of Syracuse, and was built in the Hellenistic period. Reconstructed and extended about 300 years later, it was used by the Romans for gladiator fights. The theater, whose acoustics are great, is used for musical and theatrical performances in the summer.

The Naumachia, along with the theater, is the second largest remnant of the Roman city and also one of the largest Roman monuments on the island. It is a large terrace that protected a now non-existent cistern. It seems that naval battles were held there, hence the name. Corvaja, in 1410, was the seat of the Sicilian Parliament. On the front of the building a series of moral judgements were written in Latin. Higher up, on the first floor, there are large open windows and a very picturesque inner courtyard.

The Cathedral, dedicated to St. Nicholas, was built in the town square in the thirteenth century . Later in the fifteenth, sixteenth and seventeenth centuries, it was remodeled with an appearance eminiscent of Norman cathedrals. The main door, surmounted by two windows, is in Renaissance style of 1636. Inside, there are interesting paintings by Antonino Giuffrè (1436) and an alter piece by Antonello de Saliba (1504). The elegant Palace of the Dukes of Santo Stefano, built between the fourteenth and the fifteenth century, is a fine example of Sicilian architecture. The mighty external walls are lightened by lancet windows, with four more elegant windows on the main floor.

Letojanni Beach is property of the state, but in a concession to manage the hotel beaches. It’s very long and wide coastline , alternating between sand and pebbles, with a clear and beautiful blue sea. Tourists can choose between lidos or almost 2 kilometers of a free (no entrance fee) and clean coastline. Near the beach there is also an association that provides information regarding water sports, sea excursions, and scuba diving, all licenced. Those who can not stay away from the beach can go back in the evening to attend the many local venues for dining and dancing housed directly on the beach.

Cost per person: €65 (From the third person on the cost is €55 per person) Prices do not include entrance fees for attractions, dining, or other various spenditures. Prices are VAT included